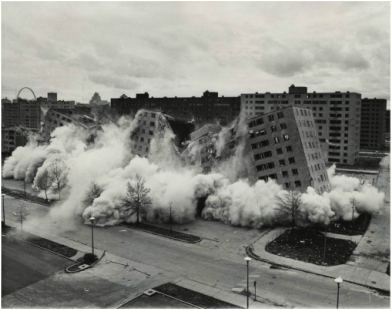 Erected in St Louis, Missouri, in the early 1950's, at a time of postwar prosperity and optimism, the massive Pruitt-Igoe housing project soon became a notorious symbol of failed public policy, its 33 towers destroyed a mere two decades later. Such symbolism found its most immediate expression in the iconic image of an imploding building, the first of Pruitt-Igoe's towers to be demolished in 1972.
The scale of the project made it conspicuous from the get-go: 33 buildings, 11-stories each, arranged across a sprawling, 57 acres in the poor DeSoto-Carr neighbourhood on the north side of St Louis. The promise of Pruitt-Igoe's early years was swiftly overtaken by a grim reality. Occupancy peaked at 91% in 1957, and from there began its precipitous decline. By the late 1960s the buildings had been emptied of its residents, the number of windows broken to the point where it was possible to see straight through to the other side.

This is a lesson about praying. All branches of governments need to pray about projects as much as talk about it with each other. They do not know the true outcome of what they want to do. They can plan and strategize but to no true conclusion. We all need to pray for everyone in government, without prayer they have their heads in a hole in the ground with no sound decisions being made! If you are offended with this writing I am sorry but you are a mess. Me also that's why I pray!