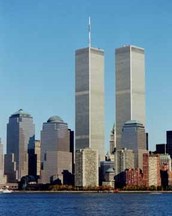 THE POWER OF WORDS
By Mark Flippo

The Twin Towers of the World Trade Center in New York from 1960, when the first drawings were drawn, to 1973 when the buildings were finished, a lot of conversations were held about the details of the complex. There were 110 stories with 13.14 million square feet and 198 elevators. There were 50,000 workers and 200,000 visitors daily, they had to move 23 acres of dirt. It occupied 13 square blocks and you could see for 45 miles from the observation deck. From the time that the first plane crashed into the first tower and the second plane crashing shortly thereafter into the second tower it was only one hour and twenty five minutes before they both had fallen.

You decide which side of life affects you. Do you bring life or death, with what you say? Words have power. Your words can influence many others. They can set into motion evil or great things! Physically, spiritually or emotionally words can heal or hurt. God help us to be mindful and think before we speak. Let’s help build the Kingdom of God together!