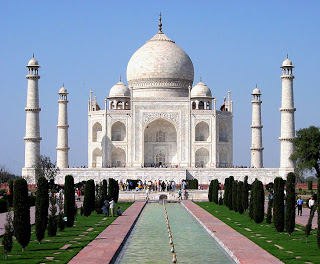 The Depth Of Love!
By Mark Flippo

It was built by Mughal emperor Shah Jahan in memory of his third wife, Mumtaz Mahal. Mumtaz Mahal died in Burhanpur in 1631 AD  while giving birth to her fourteenth child. After her death, Shah Jahan went into secluded mourning for a year. Burhanpur was never intended by her husband as his wife's final resting spot. As a result, her body was disinterred in December 1631 and transported in a golden casket. There it was interred in a small building on the banks of the Yamuna River.  Shah Jahn began planning the design and construction of a suitable mausoleum and funerary garden in Agra for his wife. It was a task that would take more than 22 years to complete: The Taj Mahal.

﻿It is amazing what Love can do to someone. You never stop loving even after they pass. Some remember them in photos. This Emperor made a place that all would see and remember his wife. He did not want her ever forgotten!  We have ways to remember our Savior. The Cross and The Bible! We will never forget His physical body passing. Since His Spirit is always with us, whenever we want to feel Him! Just call on His name JESUS!