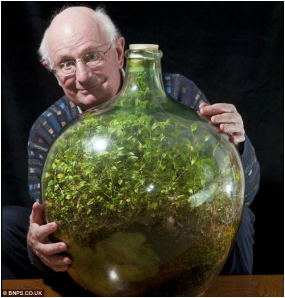 Not Watered In 53 Years
By Mark Flippo

﻿ David Latimer and his soon to be 54-year-old bottle garden that he started on Easter Sunday back in 1960. Using a ten gallon carboy, Latimer poured in some compost, a quarter pint of water and carefully lowered in a seedling (Tradescantia) using a piece of wire. He then placed the bottle garden by a sun-filled window in his home and let photosynthesis do it's thing. It wasn't until 1972 (12 years later) that Latimer gave his bottle garden another drink and it has been sealed ever since! If the proper planning goes into something we want to do. Turn it over to God and it will be self sufficient to keep it going for years!