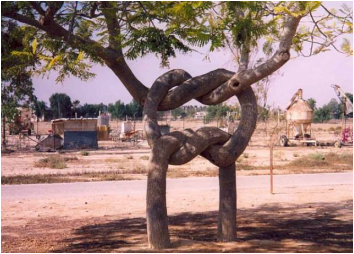 Tying The Knot!
By Mark Flippo

I don't think that when families talk about tying the knot that this image comes to mind. Now I don't mean that after a long time being married you won't be all bent out of shape! At least not because of the marriage part. This photos just shows a good point! You are no longer single but are joined together because of your commitment to each other. You have become one, a creation of beauty by our Heavenly Father! The two of you are unique, stronger, and can bear more burdens together than you could have separately!

Proverbs 18:22  Whoso findeth a wife findeth a good thing, and obtaineth favour of the LORD.

Thank God for my wonderful wife Marian! I would be lost without her. Husband's give your wife credit often for being the helpmate you need. Try apologizing a lot and often. It does not matter if you were right or wrong. What you said may have been right but you most likely said it with the wrong attitude. Being tired or in pain makes that happen a lot! Not that I am ever crabby. Just don't ask her. Love Y'all