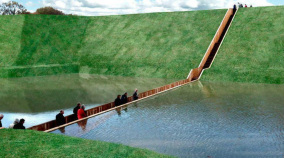 This is the Moses Bridge in the Netherlands
By Mark Flippo

Isn't this a quirky little bridge. I guess you get a little bit of an idea what it was like for the Israelite's to cross the Red Sea! ﻿The Bible says that there were 600,000 fighting men. Scholars calculate that this would  mean at least 2.5 million Israelite's, including women, children, priests and the elderly. The Bible also says that the Israelite's had cattle, which would also have been driven across. Travelling several persons abreast, we could start by assuming that on average one person crossed every second, day and night for twenty four hours a day. Two and a half million people would take up to 29 days to cross. The date of the exodus was 1446 BC, in the 18th dynasty of Egypt, 480 years before Solomon built the Temple:1 Kings 6:1.
To the north of the straits of Tiran the depth up through the center of the gulf of Aqaba from ranges between .5 miles to 1.2 miles. There is an underwater land bridge which cuts northeast from the Sinai Peninsula across the Strait of Tiran, from the airport beach going across Tiran Island. It is approximately 11.2 miles long, at least .5 miles wide and is less than .05 miles below sea level, except for a .5 mile wide section just off the Sinai Peninsula coast which is .13 miles at its deepest point today. If the Red Sea parted here it would expose a natural pathway linking the Sinai Peninsula with Arabia. I have seen movies of this underwater section and it has remnants of chariots partly buried in the sand! God can part your troubled waters for you!