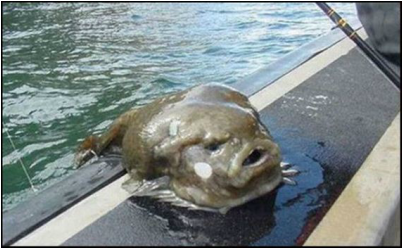 What Is It?
By Mark Flippo

Definitely a face only a mother could love! I have no idea what kind of a fish it is! Is it edible? I would not want that in my aquarium. My father-in-law could come up with a whopper of a fish story. The way he talked he hauled in the whale that Jonah came out of! He caught at least five foot fish with a gold coin in their mouth. Well He was not quite that bad but was getting close. He and mom came over and stayed a weekend. We had a few deer in the yard. He already told me when he got home there would have been a huge herd!
​He could stretch the truth until it almost popped! I miss Him, he was such a character! That is one thing about Jesus He does not stretch the Truth! If He says one thousand you can depend on the number. He will be answering some desperate needs this year! You will have to pray into the anointing and stay in it until you come to the Peace of God's anointing. When you are there it is a Holy Hush! You just want to sit and wait upon the Lord. That is when He can open up His plans to you! Everybody better get ready because that is the only way you will know and understand God's will!