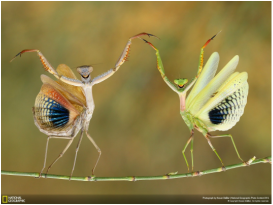 The name mantodea is formed from the Ancient Greek words meaning "prophet," and  "form." It was coined in 1838 by the German entomologist Hermann Burmeister. That was interesting for me. The form of a prophet. After birth the mantis eats small insects or its own siblings. Now there is a whole lot of truth in that. A false or form of a prophet would destroy his own family first. Cannibalising their mates is common among most predatory species. The female may begin feeding by biting off the male’s head, the male finishes without his head. Do I need to even comment on our spiritual lessons men!