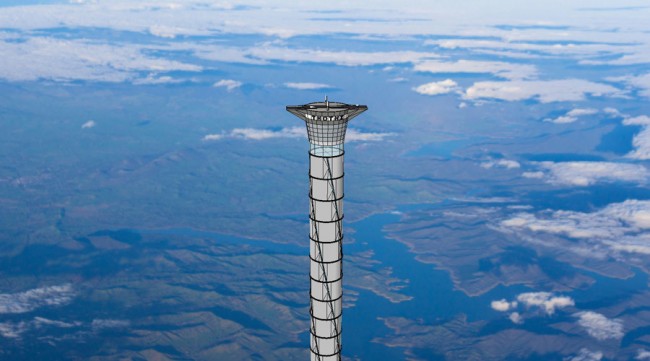 Reaching For The Stars
By Mark Flippo

A towering structure rising 20 kilometers (12 1/2 miles) into the air with its top in the sky may sound like something out of an Old Testament passage or science fiction novel, but a Canadian space company has proposed just that to cut the costs of space exploration. Last month Thoth Technology was granted a United States patent for a “space elevator,” which would be more than 20 times taller than the 829-metre-high Burj Khalifa in Dubai, the tallest building in the world. That is also beyond the so-called “Armstrong limit”
– a point at an altitude of 19 kilometers where body fluids start to boil off due to low air pressure. “The space elevator tower has a segmented elevator core structure, each segment being formed of at least one pneumatically pressurized cell. The pressure cells may be filled with air or another gas,” the patent can stay on surface of the elevator core structure or in a shaft on the interior of the elevator core structure.”

In some ways it reminds me of the Tower Of Babel in the Bible. Man declaring that they will build to the heavens. No need for spaceships anymore. Just take an elevator to the highest place in the world and have a God's eye few (12.5 miles high)! I am sure great tests can be performed in that environment. Sadly if there is a fire no fire dept can reach you. But with the good comes the bad. What kind of evil could be created up there? What could be dispersed up there to affect billions. Death with a new wrinkle! I am sure there will be many battles fought and lost over this project! Let us pray that good will triumph in this case!