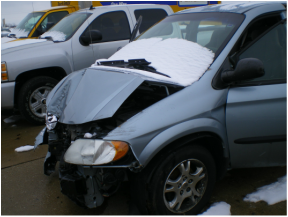 DEADLY ICE AND OUCH THAT HURTS!
By Mark Flippo

Back in February of 2012 my wife and I had gone out to get my new glasses that had just come in. We knew a bad winter storm was coming our way. It would only take about twenty minutes to get there. We will be OK. Roads were dry so we felt fine. As we were leaving the eye doctors office it started snowing. We assured ourselves it will be fine.
We were almost home, my wife was driving, she was only doing about 15 miles an hour. We topped a hill and she slowed down but I could feel us starting to slide. The first thing was "Dear Jesus help us." We starting sliding faster and sideways heading straight for a fence and a tree. It all happened so fast. We hit that tree and it picked up the back of the van and with the momentum it threw us sideways. There a loud crash and extreme pain in both our chests.
We yelled out! Smoke had filled the front. My wife was so beside herself she pushed her way out of it thinking we were on fire. We were not on fire but powder from the airbags had come out. The new glasses I had just put on were gone, the windshield was cracked. The tree t-boned the van in front of my seat. She got back in and we were trying to find out how bad we were hurt.
​ We were both crying out in horrible pain. I just reached over to her and held her hand and told her "at least we are together in this!' There were broken ribs, bruising that you would not believe, but we survived! My point in telling you all this is if you watch everything around you GOD gives warnings before disaster strikes. Ice on the sides of telephone poles and trees would have warned us if we had been watching. Learn to listen to the Still Small Voice of GOD and let HIM save you from Pain and Heartbreak!