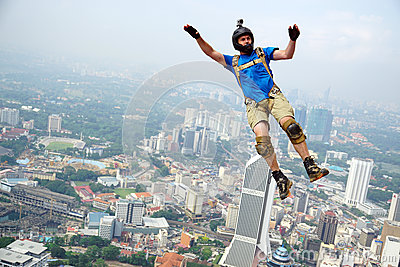 Base Jumping
By Mark Flippo

BASE jumping, also sometimes written as B.A.S.E. jumping, is parachuting or wing suit flying from a fixed structure or cliff. "BASE" is an acronym that stands for four categories of fixed objects from which one can jump: jumping, antenna, span, and Earth (cliff) Due to the lower altitudes of the jumps, BASE jumping is significantly more dangerous than skydiving from a plane. In the U.S., BASE jumping is currently regarded by many as a fringe extreme sport or stunt. In some jurisdictions or locations, BASE jumping is prohibited or illegal; in some places, however, it is permitted. BASE jumping became known to the wider public by depictions of BASE jumping in a number of action movies.

Doing this sport you should make sure that Heaven is your next destination should your chute fail! Or a huge wind change near building that slams you against one of them and crushes you! Just saying it is possible! Make your heart right with God! Listen to His impression the way He can talk to you!