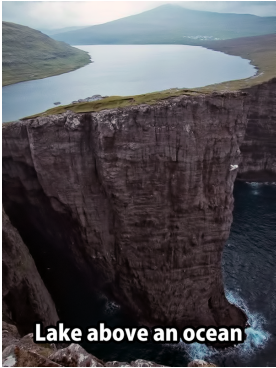 Sørvágsvatn (or Leitisvatn) is the biggest lake of the Faroe Islands, situated on the island of Vágar. It covers an area of 3.4 square km, more than three times the size of the second biggest lake Fjallavatn, which also lies on the island of Vágar. The picture you see below is really an optical illusion. It appears as if the lake is significantly higher than the ocean. In truth, the lake is only 30 meter (98 ½ ft) above the sea level, but the cliff facing the camera is 100 meters (328ft) high. The position of the camera and the angle of the shot makes it seem like the lake is about the same level as the cliff.

This is one of those photos that the photographer was in the right place at the right time! What you can't see, because of the angle the lake is just slightly higher and drains into the ocean. You can just barely see the homes on the mountain side between the lake and the ocean. Can you see them? Where the lake is at the slope is very steep but from another angle it is a very small lake. Children of God let God open your sight to the Truth that is around you. Stop being deceived! Let Truth stand in the front and not sit in the back seat! It's your time to shine!