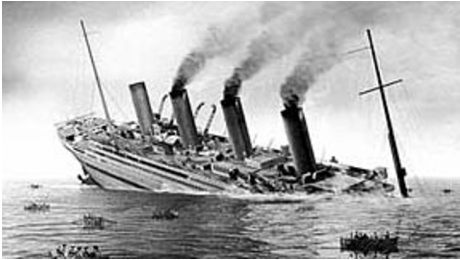 Bruce Ismay, the White Star Line executive whose idea the Titanic was, envisioned three mighty sister ships. Olympic, who made her maiden voyage in 1911, was the first of the three. She had a long career that lasted into the 1930s. Titanic–well, we all know what happened to her. Britannic, the last and largest of the sisters, was still being completed when World War I broke out.
The British government commissioned her as a hospital ship for wartime use, before she’d ever made a single North Atlantic voyage or carried a single paying passenger. It was in this capacity that, on the morning of November 21, 1916, as she was headed for Lemnos, Greece to pick up British casualties from the Middle Eastern campaign, the ship struck a mine that was planted by a German U-boat. The crew, having been drilled in emergency procedures, swung into action like clockwork, immediately going to their posts and preparing to evacuate wounded patients.
​Unfortunately some of the watertight doors between the bulkheads were not closed or could not be closed, for reasons that remain unclear. As flooding increased the ship listed to the side. It was a very warm day on the Mediterranean and many portholes were open. When the ship began to heel over, water came in through the portholes. It took only two minutes for Britannic to flood as badly as Titanic had in an hour. Clearly the ship was doomed.
For one unfortunate British nurse, Violet Jessup, this was her second time around. She had also survived the sinking of the Titanic four years earlier. She was a pretty hardy woman, eventually living almost 60 years beyond both disasters.

It is amazing what we can go through and still continue living a good life.