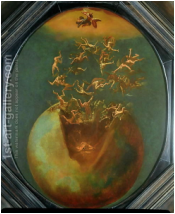 The Biggest Mistake Ever!
By Mark Flippo

We have all made mistakes and sometimes they are whoppers! From the wrong thing coming out of your mouth. Breaking something very valuable to cars colliding. Falling down, this one is mine. While cooking I opened the drawer to get my Oveglove out to protect my hand from the heat but there was only one. I wondered did the other one fall down behind the drawer or did I put it in the wash? Guess where I found it. It was on my other hand! LOL! I had to laugh at myself. I was so preoccupied in what I was doing! We have all have our bright spots. Now to the point of this lesson. Satan made the biggest blunder of all time!

(This next portion was written by Rev Mike Blume.)
Any portion of the following needs permission by the author.

It's not really conclusive but it seems like lucifer in Isaiah chapter 12 was satan's former name. Although that might just refer to the king of Babylon. And Ezekiel chapter 28 talks about the covering cherub, which may be Lucifer as well. But it may not. And because he had precious stones as a covering, he was like a high priest. He led worship. He was the most beautiful of all angels and of course his heart was lifted up in pride.
​He walked on the stones of fire, which may indicate the sea of glass before the throne while God is a consuming fire reflecting off the glass. That would indicate a very close position before God's throne as high priest. And because he was high priest and was the covering cherub, that meant he had authority. It says that he was going to exalt his throne above the clouds which meant he was under them on earth.  Also meant he had power. So it seems he had power over the earth and ruled this part of the universe. But he wanted to exalt his throne and be like God because you can't get higher than God.

He wasted his existence when it had pride in his heart!!  It must not have had the right thinking. As I have heard this saying,  “he was messed up from the floor up!”