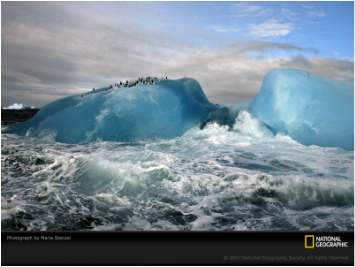 This Is New To Me, A Blue Iceberg!
By Mark Flippo

A blue iceberg is visible after the ice from above the water melts, causing the smooth portion of ice from below the water to overturn.The rare blue ice is formed from the compression of pure snow, which then develops into glacial ice. Icebergs may also appear blue due to light refraction and age. Older icebergs reveal vivid hues of green and blue, resulting from a high concentration of color, microorganisms, and compacted ice.One of the better known blue icebergs rests in the waters off Sermilik fjord near Greenland. It is described as an electric blue iceberg and is known to locals as "blue diamond."

There is always something you have never seen in, on, under, or above this earth. If you let Him He is always pleased to share something that He created that is new to you. Be awe inspired and He will keep you that way. Bless the name of the Lord Jesus!