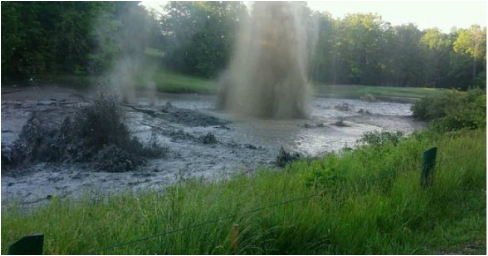 The Is A Real Water Hazard
By Mark Flippo
​
Witnesses said the pond’s surface churned, water and mud spouted like geysers and a strong smell like gases filled the air. The blame was placed on a previously unknown methane pocket. It’s said that nothing stops serious golfers from completing a round, but golfers at Indian Hills Golf Course in Lambton Shores, Ontario, were forced to evacuate after the water hazard on one hole became really hazardous.

This part of the Golf Course blew up. That was a serious water hazard for golfers that day. It was throwing mud on everyone and everything! They ran for their lives. Nobody made par that day! They had to shut the course down and it is still closed for investigation! Man can make things beautiful but God can show you what research should have been done that didn't happen! Many things are hidden from man! But God knows everything! Seek His Will before you take on any project! You don't want to put a lot of money into something and have it blow up on you!