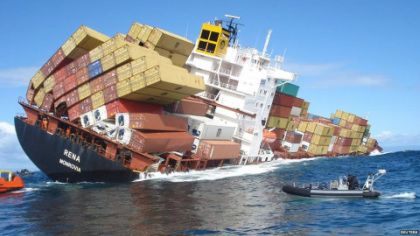 Have you ever had and oops moment in your life. Some are just bigger than others. This vessel ran aground. They did not have eyes to see everywhere around them. We do have God watching over us! He sees what we do not. If we will listen to that Still Small Voice He will guide us around the bad places in our lives. He can protect us if we will allow Him! They had a lot invested in this container ship, but lost it.  What affects you affects your family. Don't lose your valuable cargo because you are not sensitive to His Voice!