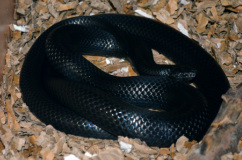 The Sky Is Falling
By Mark Flippo

My nieces family was having a nice lunch on their outside picnic table which was shaded by a lovely tree. She was on one side of the table and her mom and 3 year old son Preston were on the other side. There was a loud THUD just behind them. It was a huge Black snake. Her mom jumped up and screamed and made like the Road Runner cartoon and was gone in a flash.
​ The snake was stunned and did not move for a few moments. As she was telling me about this event in her life, I thought how often we are so close to something that can frighten us so bad or worse, and God reaches down and moves things just enough so it won't be as worse as it could have been. It could have fallen on them. It was as big around as a bat. God is merciful. Even when bad things happen they could be far worse. Thank you Jesus that we are always on your mind!