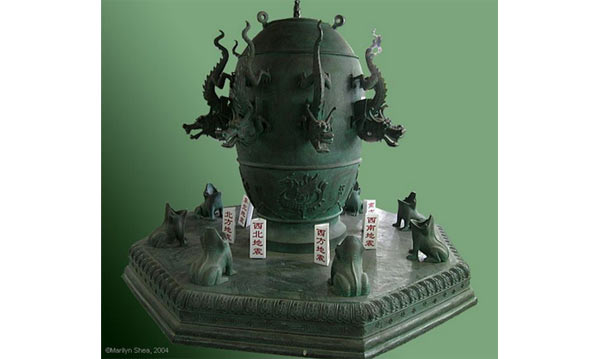 Zhang Cheng was an astronomer, mathematician, engineer, geographer and inventor, who lived during the Han Dynasty (25 – 220 AD).  He is credited with developing the world’s first earthquake detector.  Zhang's seismoscope was a giant bronze vessel, resembling a samovar almost 6 feet in diameter. Eight dragons snaked face-down along the outside of the barrel, marking the primary compass directions. In each dragon's mouth was a small bronze ball. Beneath the dragons sat eight bronze toads, with their broad mouths gaping to receive the balls. When the sound was heard they would rush in and know which direction the shake had come from by which frog had a ball in their mouth!

So many civilizations have come to power only to vanish with the majority of their high tech gadgets. More than I care to count. But they fill volume after volume in our library's! Let's not make the same mistake and forget God in our daily lives, or we will vanish just as fast as previous cities! It is happening before our eyes if you care to have them really opened just talk to God faithfully! He will give you an answer, you may not like it but if you are warned you can be armed. (Prepared)