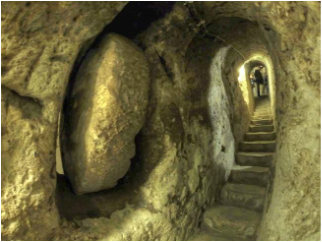 While redoing his house in 1963, a man in the Nevsehir Province of Turkey, in an area known as Cappadocia, knocked down a wall. What he had found, unbeknownst to him at the time, was the ancient underground city of Derinkuyu. Derinkuyu was an entire city carved into the stone below Cappadocia, reaching some 60 meters down. It had 18 levels, and included residences, churches, food storage, wineries, and even a school. It was designed to house some 20,000 people as well as a number of livestock. It features vents to the surface and several discreet entrances like the tunnel found behind the wall. These hidden entrances suggest that the city was built as a precaution in order to shelter the population in times of war or natural disaster.

God has a place of safety for you! When times come of extreme trouble you can call upon Him. He will answer and lead! It may not be a cave but His children are foremost in His mind. He is more concerned with His children than you are with yours. Never forget He knows who are His! And His Angels are watching over you!