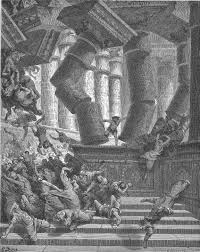 Temple Of Dagon
By Mark Flippo

Judges 16:
26-And Samson said unto the lad that held him by the hand, Suffer me that I may feel the pillars whereupon the house standeth, that I may lean upon them.
27-Now the house was full of men and women; and all the lords of the Philistines were there; and there were upon the roof about three thousand men and women, that beheld while Samson made sport.
28-And Samson called unto the LORD, and said, O Lord GOD, remember me, I pray thee, and strengthen me, I pray thee, only this once, O God, that I may be at once avenged of the Philistines for my two eyes.
29-And Samson took hold of the two middle pillars upon which the house stood, and on which it was borne up, of the one with his right hand, and of the other with his left.
30-And Samson said, Let me die with the Philistines. And he bowed himself with all his might; and the house fell upon the lords, and upon all the people that were therein. So the dead which he slew at his death were more than they which he slew in his life.

﻿Samson did many great things, but he had weaknesses. Jesus can make us strong in our weakness! Don't be deceived, any of us can fall. Forgive everyone! That is very hard to practice! We have many times we need to be forgiven! Samson found Grace in the eyes of the Lord! It was the last and final act of his life. Don't hold out for making it right at the last minute! Many do not know they are in the last minute of their life right now!