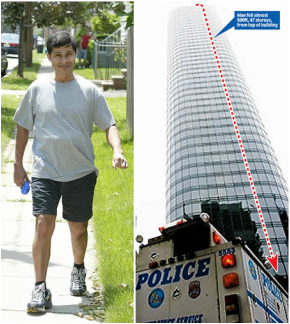 Alcides Moreno, 37, fell 47 stories from a New York skyscraper when a freak accident sent his window-washing platform plunging to the concrete pavement. The accident killed his brother, who was working on the same scaffolding platform, and left Moreno is such a bad state that doctors couldn't risk moving him to an operating room. Instead, they operated on him in the emergency room, leaving him in a vegetative state for nearly three weeks. Finally, he showed signs of consciousness and spoke -- on Christmas day. Less than a month later, he was discharged with the expectation that he would walk again within a year's time. Considering that the death rate from even a four-story fall is about 50%, Moreno's survival, thanks in part to some fortunate circumstances, is astounding.

He had a Guardian Angel with him! We can't fly without assistance but we sure can fall! Thank you Heavenly Father that you send Angels to help us in our time of desperation!