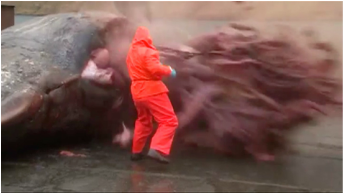 The Exploding Whale
by Mark Flippo

Now this is really gross. National Geographic had a special on about this particular whale. It had died near land and they had to move it. They had straps under the front and the back and were lifting it from the water. But they found out the trailer they had brought to put it on, was too short! So they waited some time for a replacement trailer. The whale was left on the straps for several hours. Would this new trailer be long enough? What they did not realize that there were things happening inside the dead whale that they were not aware of.
​ Many gases and other things were building up inside of it. The constant stress of the straps on the whale were slowly tearing it apart. As they were passing through this small town it exploded. There were guts and blood over all the buildings, cars, motorcycles, streets, and street lamps to say the least the truck looked horrible. What has all of this got to do with the spiritual lesson? We see the stresses that are on other people. We see what's going on outside of them. Could your neighbor, your friend, your family member be ready to explode? Are we sensitive enough to their needs? How can we help to prevent their situation from exploding out of control? GOD helps us to be sensitive to other's needs!