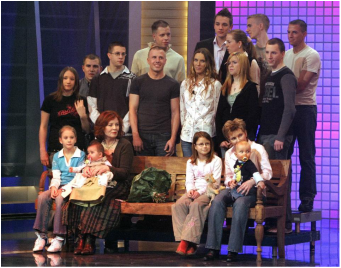 I Still Can!
By Mark Flippo

Doctors say the week-old quadruplets born prematurely to 65-year-old Annegret Raunigk in Berlin are still in intensive care, but have been gaining a little weight and are being given their mother's milk through feeding tubes. The babies were born during the 26th week of pregnancy at Berlin's Charite Hospital on May 19. Neeta and her three brothers — Dries, Bence and Fjonn — weighed between 1 lb., 7 ounces and 2 lbs., 2 ounces each at birth. Raunigk is believed to be the oldest mother to have ever delivered quadruplets, said Charite's director of obstetrics, Wolfgang Henrich. The school teacher already has 13 children, aged 9 to 44, from five other fathers.

I am not sure if this supports the theory that you are never to old to do something. Should she get a pat on the back or get her tubes tied. I guess that is her right to decide for herself. People use to have big families and the older children would help raise the younger ones. That is how it was before modern day birth control. It was a struggle for us and we only had two boys. The Lord knows what we can bear. May the Good Lord help Annegret with so many young ones at the same time. Are you tired for her, I know I am?